Beautiful and unspoiled Alonissos, a gem in the Aegean Sea. 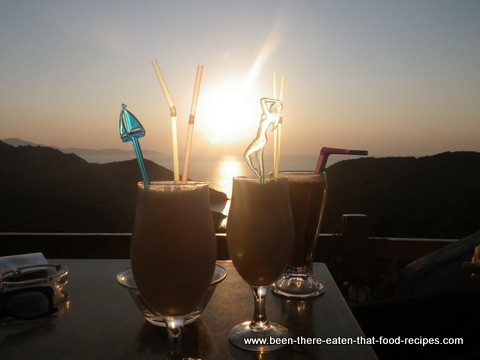 We spend a wonderful family holiday in Villa Vala. We were attracted to this isolated villa because it was located within the National Marine Park, and offered easy access to the beach (Agios) Petros and the richness of its sea-bed. The spectrum of life under the calm and warm emerald waters was unbelievable. 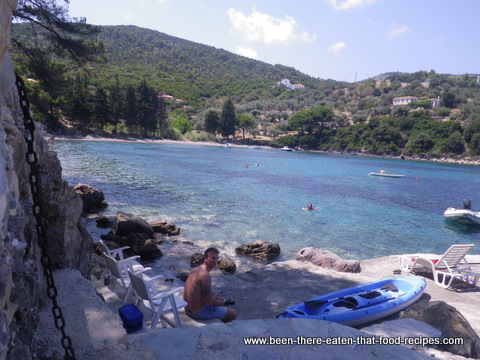 The local sea park is the only place where the Monk Seal "Monachus" finds shelter. It is the first park of this kind in Greece and the biggest in Europe.

We took advantage of everything that the island has to offer. We swam inside Alonissos Blue Cave, ... 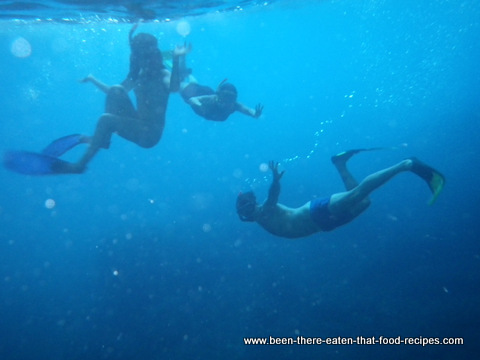 ...visited the smal fishing village of Steni Vala by kayak, ... 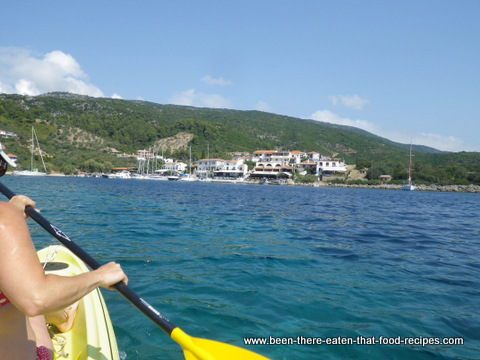 ... explored the nearby islands by traditional boat, ... 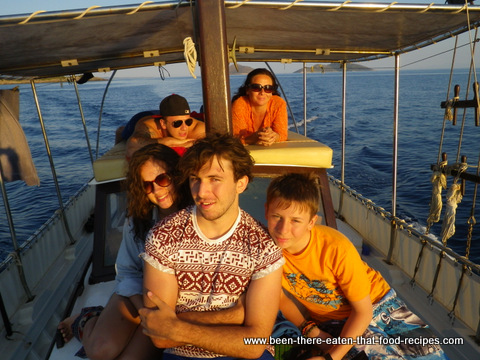 and enjoyed the views during our trekking trip to the ancient spring waters of Peristéra. 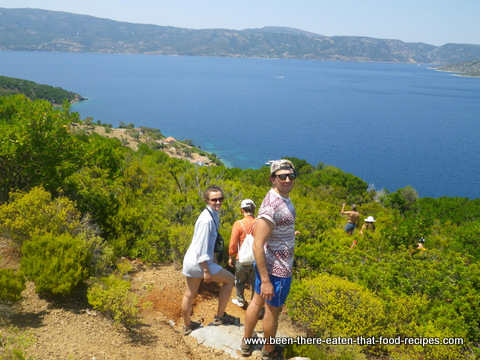 Alonissos enjoys a very relaxed atmosphere mainly because is well away from tourists. A common question we were asked was: "How did you know about this island?"

Unlike other Greek destinations, this island is very green!

The capital of the island moved from Chora (or Palió Chorió or just Alonissos) to Patitiri, the island's port, after the 1965's earthquake that destroyed most of the old town. 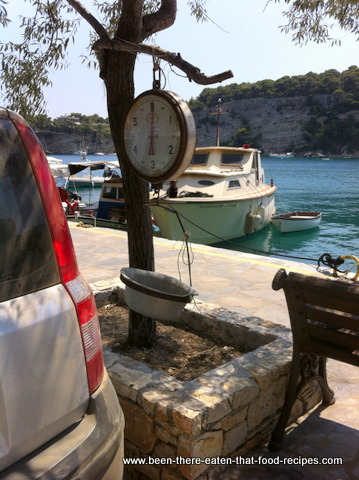 The day after we arrived to Villa Vala, we walked the short coastal distance to the beautiful Steni Vala. In there we sat at one café by the water. Its owner, named Kóstas, very friendly welcomed us explaining that his family’s café offered drinks and snacks, but no meals because “we are very lazy to cook” as he put it. Who could blame them, in that heat! The groceries shop next to the café, named Íkaros, also happened to be owned by him and his family. We did our shopping in there. Kóstas not only offered to deliver the shopping to Villa Vala in his car, but also, when he was having a problem with the card machine, he told us not to worry, we could pay him later (~200 Euros). He didn’t know us at all, he could never see us again, but he trusted us as soon as he first met us! We were very touched by that gesture!! 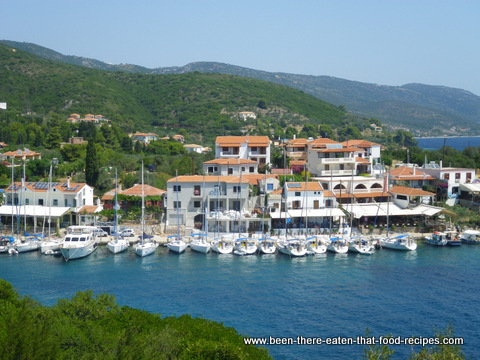 We had taken our snorkelling equipment to the island, but were one short. When we asked Kóstas where we could buy another snorkelling set, he offered us his own to keep for the rest of the week! Amazing! It goes without saying that Kóstas (at the centre of the picture) quickly became a good friend of us ... 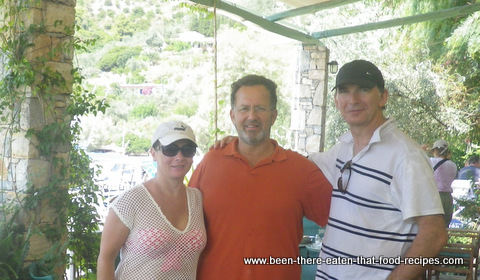 While in his shop, I noticed many books on local subjects. I'm always willing to learn more about the places we visit, so browsing the books I found one that caught my interest. To my surprise, it was written by a Kóstas Mavríkis. I asked our friend if this was him, the author of the book, and he, very humbly, said yes! I immediately asked him to dedicate it to us and he graciously did so in Greek!! 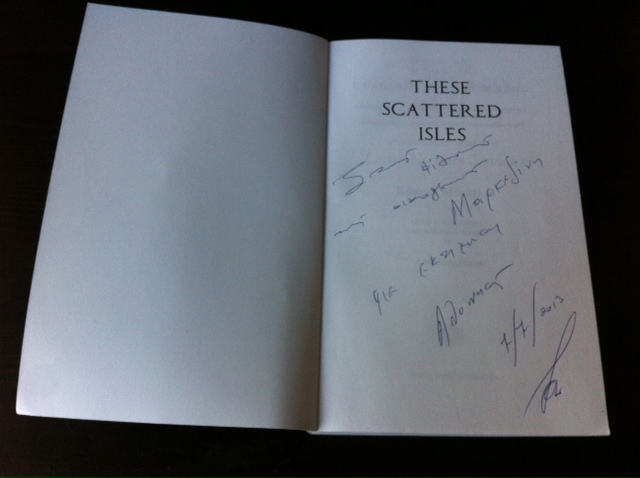 Description from the back cover of the book:

"Unlock the mysteries of the Northern Sporades - the Aegean's hidden jewels. Once a refuge for pirates, known variously as Satan's Islands, Demon Islands, Thieves' Dens and the islands of the Magnesians, the Northern Sporades - literally meaning 'scattered' - with their dramatic changes from island to island, strange geological forms and historical remains, are among Greece's most delightful secrets. For These Scattered Isles Kóstas Mavríkis, in the company of those who live or used to live on these islands, has extensively explored the lesser Northern Sporades photographing every trace of ancient habitations which have given rise to countless legends and traditions. Piecing together these legends, the historical evidence and the written texts, Mavríkis has produced a multi-faceted image of the islands of Alónnisos, Peristéra, Kirá Panayá, Yoúra, Pipéri, Psathoúra and Skántzoura and many other smaller islands. Thousands of ships of all epochs lie on the sea-bed of the Sporades, constituting perhaps the most important collection of wrecks in the world, not only for their sheer number but also because of their significance and antiquity. From the time men first set sail with primitive log boats to today's high-technology ships, these islands have served as an important junction, stopping place and refuge. All these wrecks, preserved from human greed and natural disasters, still lie on the sea-bed, ready to deliver their secrets to those who care to look. Originally published in Greek, These Scattered Isles is the product of the author's passionate curiosity to explore the islands and all that they represent, while bearing the fruits of his extraordinarily detailed research. Now translated into English by Anthony Hirst, with additional research by both Mavríkis and Hirst and a wealth of new illustrations, this book cannot fail to delight and enchant you."

I was fascinated by the book. Kóstas has managed to brighten up his very thorough research with stories told by people living in these isles from generations and generations of local ancestors, everybody intertwined with each other. As a result, the population of Alonissos and the neighbouring isles is constituted by a very close "family" community.

For me the most captivating aspect of the book, apart from the personal stories, was the one related to the many ancient shipwrecks that are still lying at the bottom of the sea, almost intact. Kóstas himself was only 14 years old the first time he dived with a basic equipment into the classical wreck of Petheménos (2500 years old!!). The tell of his encounter with this "silent, living giant" is mesmerising and intense.

His father, a harpoon fisher, had reported this finding and many others to the Eforía (archaeological administration), but due to lack of resources a proper investigation didn´t take place until many years later. Kóstas volunteered to count, measure and photograph some of the several hundred of amphorae still lying around the shipwreck. These amphorae, dating from 400 BC, had contained exquisite wine from some of the world´s best wine producing locations within the Sporades in its route to the rest of the then known world.

We had the chance to visit the place of this shipwreck by boat. The ship and nearly all the amphorae are still there! Of course, from the sea surface we couldn´t distinguish any of this, but the feeling was very powerful nonetheless!

When we went to say our good-bys to Kóstas, we learnt that he and his wife own a museum in Patitiri. He is so humble that we nearly missed this information altogether and it was only when I was asking him about details of the shipwrecks that he told us. (By the way, he told us that he hoped to see us again soon in Alonissos, because "you are the perfect family for this island"!! Wow, we were speechless by then...) 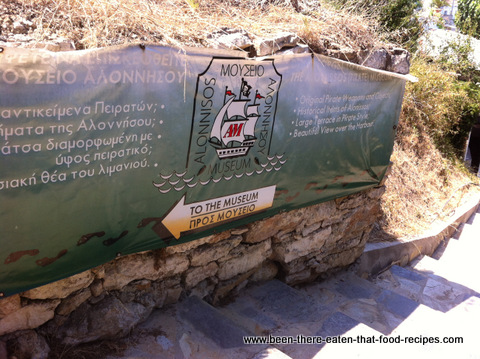 "The Alonissos Museum in Patitiri, founded in 2000 by Kostas and Angela Mavrikis, is the largest privately owned museum on any Greek island. In this four-storey building, Kostas and Angela gave place to the cultural inheritance of the island. In addition to historical items from Alonissos, the museum focuses on weapons and objects used in the early days by the pirates of the Aegean Sea. To complete the image of this beautiful stone-built building, every storey is forseen from marble sculptures and paintings of artists who visited or lived on the island respectively still live there". 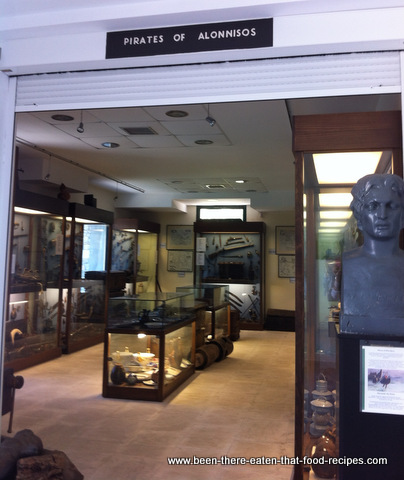 As soon as I learnt about his museum, and since it was located in the port of Patitiri where our ferry was departing from, I decided to rush a visit to it just before leaving the island. I literally ran around Patitiri asking for directions and then ran up the hill where the museum is located. I have to say that I was very impressed by its imposing silhouette and the amazing views of Alonissos!! I just managed to spend inside about 3 minutes (running around!) before having to run down to board our ferry back to civilization... Well worthy though! 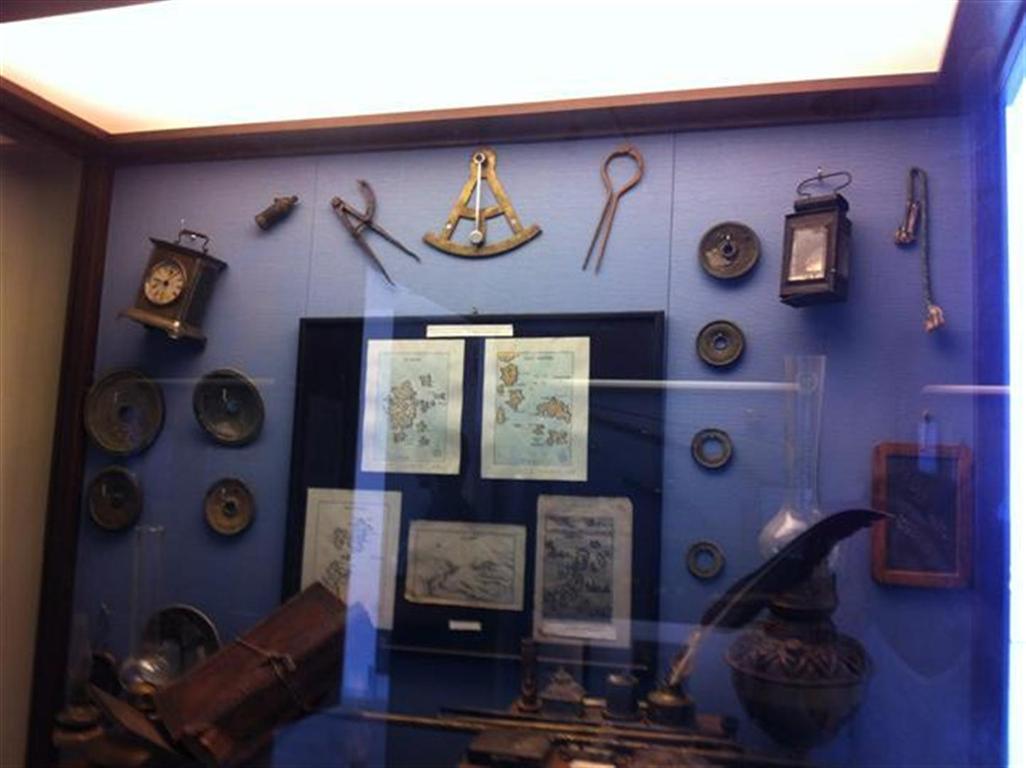 Kóstas happened to be a local legend!

STOP PRESS!! After writing this page, I found a site dedicated to The Alonissos Museum written by Kóstas Mavrikis himself. It is a very interesting read indeed! Through the site you can buy all sort of items (including sculptures, replicas, and also Kóstas' books!!) and have them delivered everywhere inside or outside Europe.

Now, to know more about local cuisine, please join me in the next page: Greek_food!

- Go from Alonissos to Moussaka